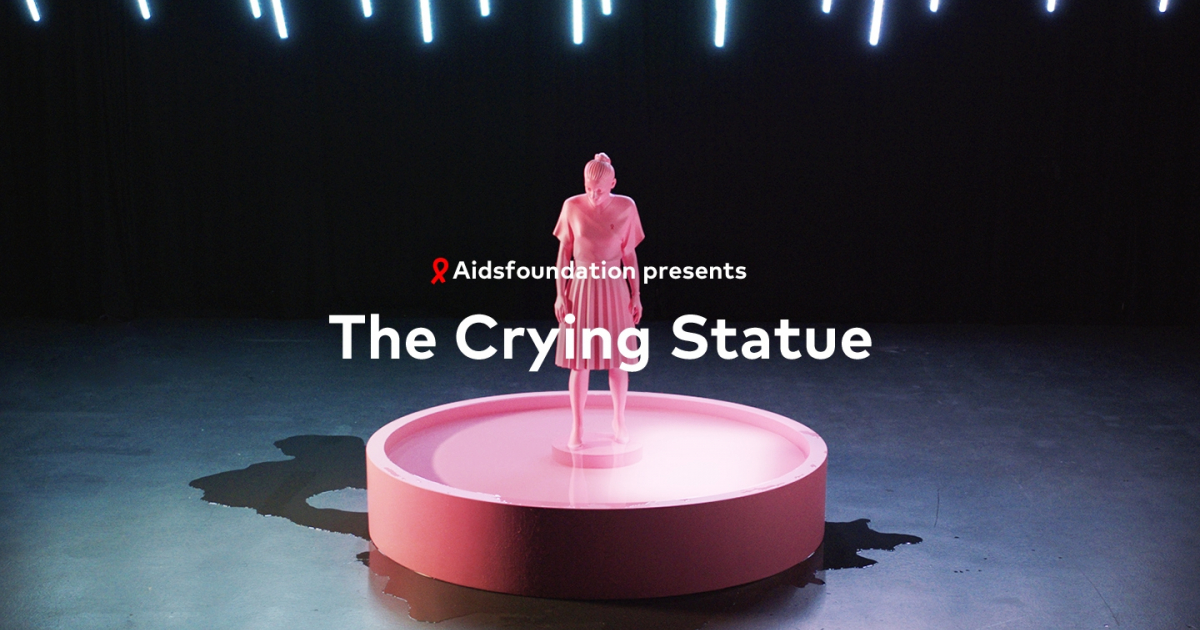 This statue cries. One tear every 40 seconds. At the same time, somewhere in the world, someone dies of AIDS. The woman stands in a pond filled with 32 million tears, representing the 32 million people who have died so far.

Here in the Netherlands the battle against AIDS is going very well. Medical treatment and precautionary medicines are widespread and stop most new infections and deaths. But the positivity surrounding AIDS (fired up by the media and satire) also stops the Dutch public from caring about AIDS and supporting the fight against the disease. Ultimately it even affects the government’s willingness to fund this battle against millions of unnecessary AIDS deaths worldwide. Creating more and, most importantly, more realistic awareness during the campaign period will provide more fertile ground for raising funds from people, organisations and governments during the rest of the year.

After our statue was damaged by vandals, different Dutch mayors, cities and cultural organisations including a modern art museum reached out to give the Crying Statue a safe haven.

After a temporary stay in the city of Amersfoort the statue is now being adjusted to occupy a permanent spot in one of these places. To be continued :)

To communicate the real facts about AIDS we used the most recent data, released by the UN on World AIDS Day.

On the same day we revealed a new monument in the centre of Amsterdam to make this cold number tangible and emotional: A bright pink statue of a lady who cries to the same rhythm as the AIDS death count, one tear every 40 seconds. The photogenic statue stands in a slowly flooding pond, filled with 32 million tears, representing the 32 mln people who have died so far.

The statue was a central idea within an integrated campaign. Right after the reveal DOOH screens in the city centre and the central train station communicated the idea and steered people to the statue. A TV-commercial and online advertising led people to the Aidsfonds website (receiving an all-time high traffic).

Micro-targeted social ads and stories showed people the real stories behind the tears in the form of short documentaries. A press release was sent to the Dutch press and spread organically all over the world.

As much as the AIDS Foundation loves to focus on positivity, World AIDS Day 2019 was time to focus on the uncomfortable reality that AIDS still exists outside of our Western world (please read our Relevancy paragraph).

Our brief was to make a bold statement and reveal the horrifying facts about the worldwide AIDS epidemic. Not by using the clichéd imagery that everybody has become immune to over the course of 40 years, but in a fresh 2019 way. 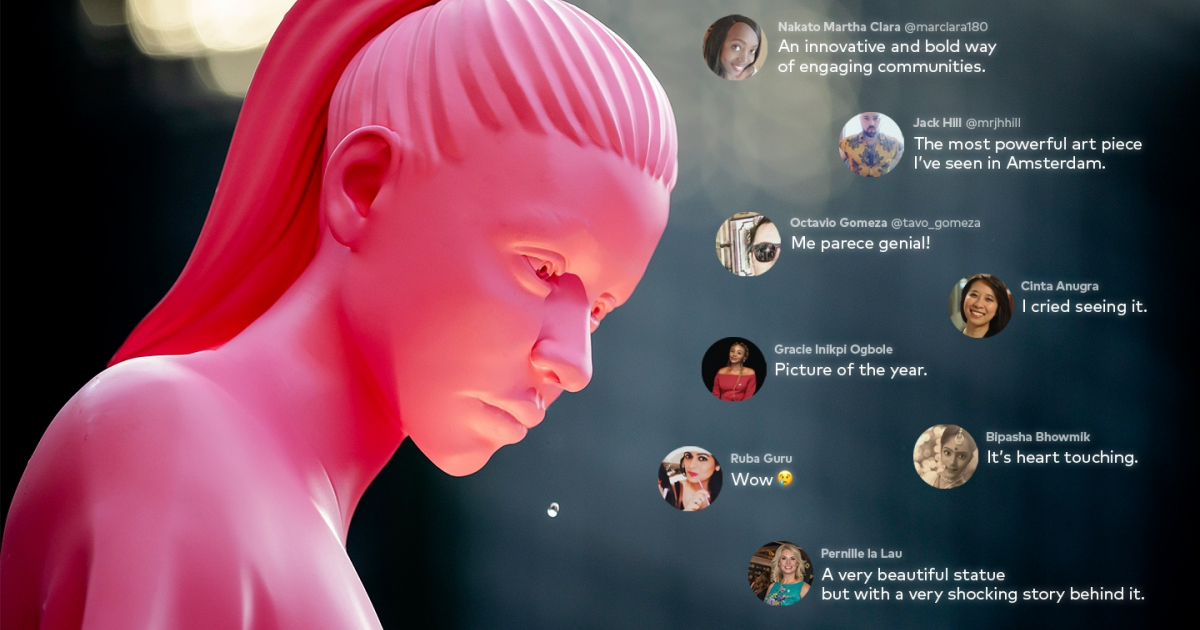 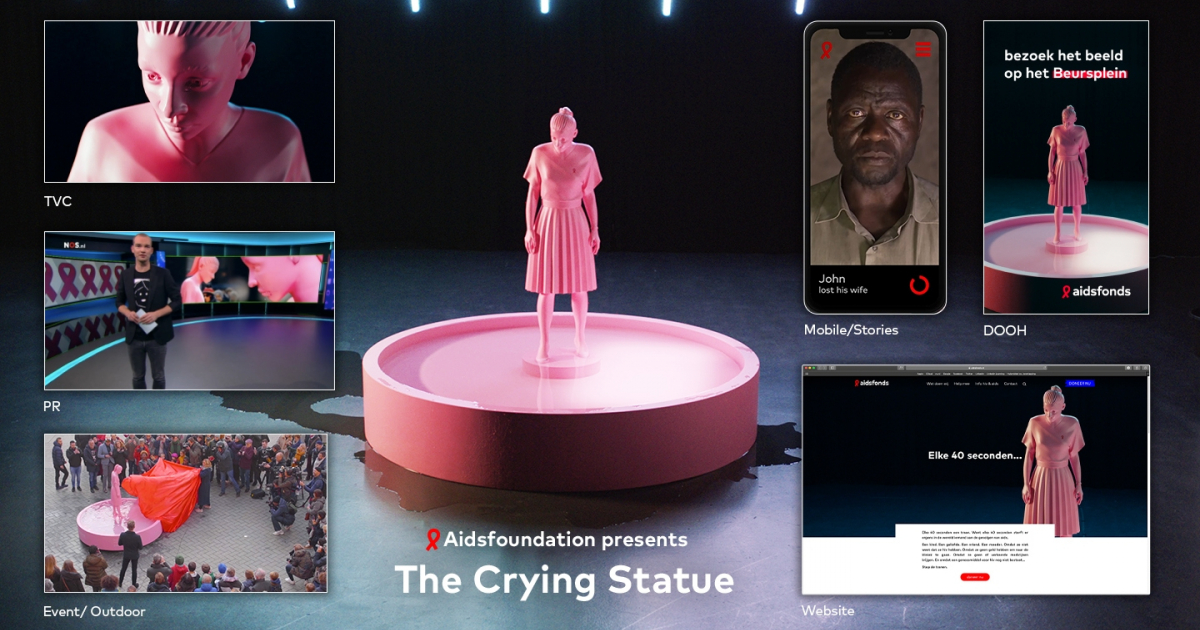 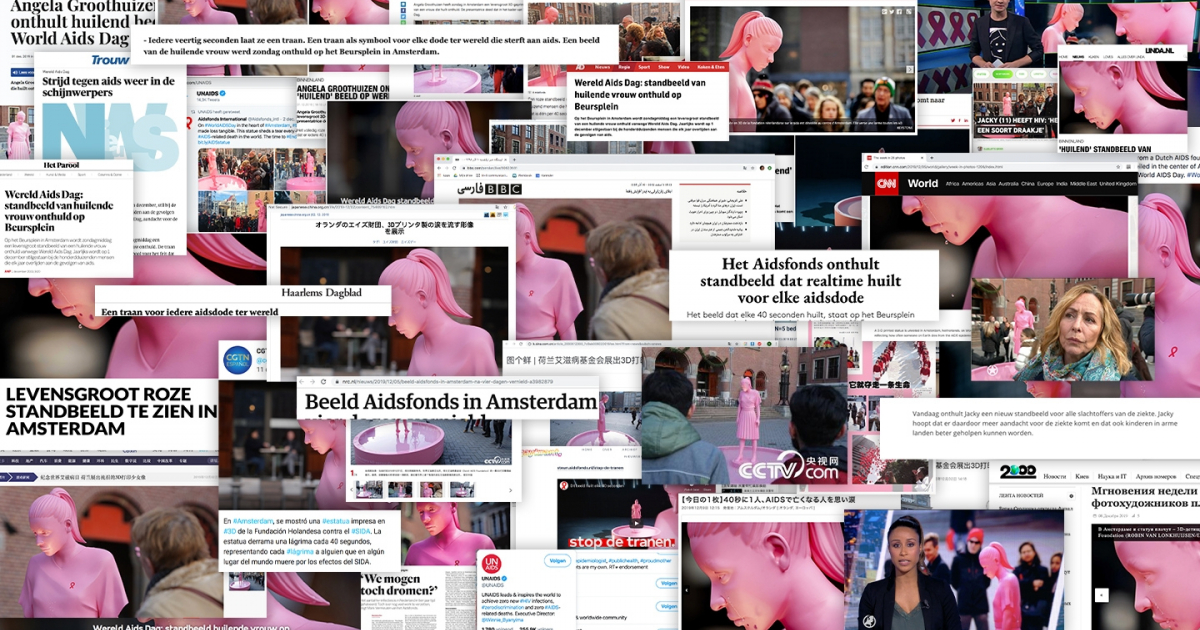 Simple ideas that communicate complex topics always cut through the noise. This is so simple in execution and stunningly powerful at the same time. The sculpture makes an emotional issue very tangible. It is a powerful symbol for a good cause that gains universal appeal and identification to raise more awareness for the battle against AIDS. The use of the technology to generate the teardrops in a physical way is both inventive and surprising.

The jury felt that this was an entry worthy of the PR noise which goes beyond just spatial design and into a well-developed brand campaign - an interesting approach in this category. The jury regrets that the Statue is not location-specific ie: its placement could have been more powerful and poignant to the cause (Fearless Girl NYC for example).

The cause of AIDS is a nearly forgotten one, to be able to grab attention with an unexpected form of outdoor was interesting. The jury’s opinion was polarised on this one, some jury members felt that the piece was almost poetic on intention, idea & execution level, while others felt that it fell short in execution. But there was majority consensus that the idea deserved a stage and a wider audience because it pushed the boundaries of outdoor.

The idea fell short of a bronze as it reminded the jury of the Fearless Girl, and because the visualisation of sadness used feminine tropes.

Intriguing image, but because of the lack of brand recognition, it missed impact. We did not recognise "the brand" - the reference to HIV. What was the story behind the statue, the women? Where did the pink came from? It left us confused.