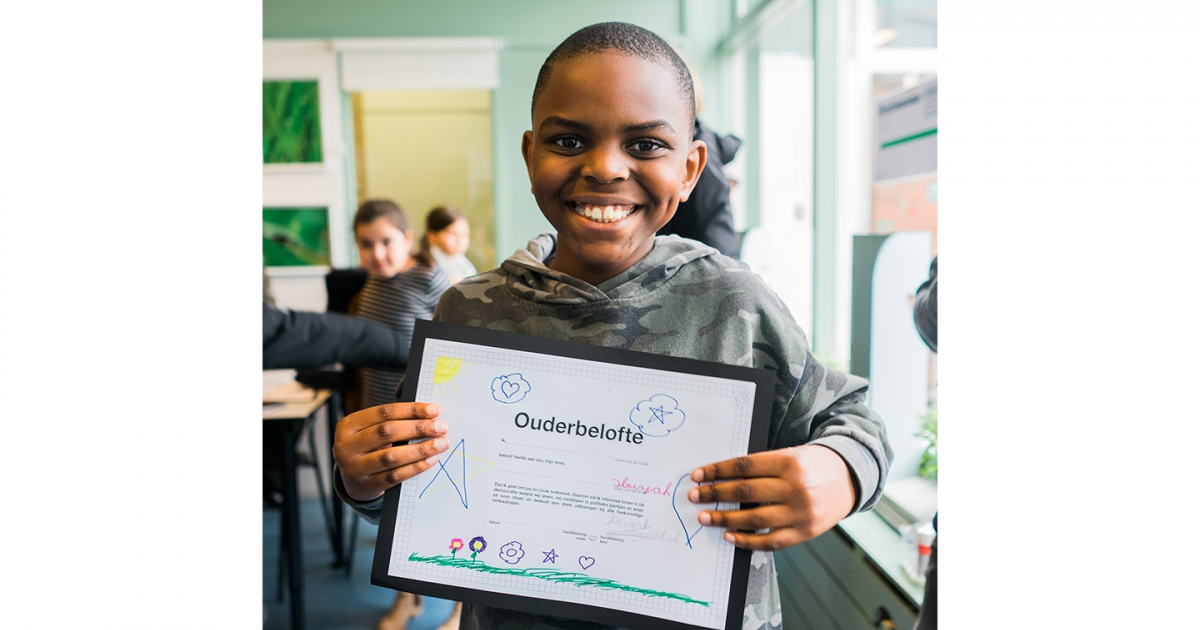 In the part of the Netherlands where least take part in elections, we taught 100+ elementary students about the importance of democracy and had them ask their parents to vote in the coming election.

We were asked to create a print advert and an online banner for JoinThePipe; a charity which sells sustainable water bottles, in order to fund ocean clean-ups and provide water to those without.

A recruitment-campaign for the Dutch police, which profiles the business operations from the police as an appealing employer for talented students and graduates.

On the last day of the program we invited the parent to the community house. Together with the kids they took place in the same hall where normally votings take place. We revealed the outcome of the playground-voting and we showed the movie.

After the movie the kids asked their parents to sign a parents promise. The parents promise is a document we made in which the children ask their parents to promise them to care about their future and therefore participate in all coming elections. The document was designed in a way so there was room for the kids to draw on and make them their own.

After all the parents promises were signed by both the kids and their parents, we hung them up in the hall of the community house, so the parents could pick it up the week after when they had to vote for the municipality election.

Our insight matches the problem of plastic waste because most people are aware of the problem but often can't understand the scale of it.

People have a hard time understanding large numbers, but a 1 to 1 ratio is easy to understand. The data we used was provided by WWF and EU.

We realised that the police is well known for catching bad guys and we thought it could be fun and unexpected to see them use the same methods to catch good guys.

Humorous and slightly absurd videos would be more appealing and have more stoping power to the young and modern target group than a traditional campaign. Therefor we created a storyboard and a conceptvideo to visualize our idea and to give an idea of our recommended tone of voice.

Because the budget was very limited, we designed the campaign to generate self-earned media attention. Most people wouldn't expect the police to communicate with humour. By using humourous and slightly absurd videos we increased the shareability and thereby hope to get shared by the target group and be picked up by big media.

We went to Bloemhof and talked with people who lived there. They felt betrayed by the government and thought their vote didn't matter. We realized that the people there probably wouldn't listen to two guys from an art academy, so we had to find another way to deliver the message.

Right in the middle of Bloemhof there is a community house. During the last election only 1 in 10 people showed up to vote there. We went there and found that the building next to the community house was an elementary school. Right there we realized that the best way to get the people of Bloemhof to vote, was by letting their children ask them to. Because who can say no to the future of their children?

In collaboration with the school, we created a one-week school program where we gave classes about democracy. We held an election for the playground and made a movie called "If I was the president" in which the kids talked about what they would do if they were the president of the NL.

Our approach was to present the reader with an eyeopening and little-known fact in an unconventional and attention-grabbing way.

We presented a proposal to create a series of small videos in which we see police officers chasing down young talent in the same way they would chase down criminals. Think of car chases, kicking in doors and armed action scenes. Every video would target a specific position needed. The viewer would be left in the illusion of watching a real police chase until the end of the video, where we reveal the police was chasing a young talented person instead of a criminal.

The project started as a school assignment. We were asked to design an utopian society. We thought that was a bit silly. We'd rather create something useful instead of something wavy, so

we decided to see how we could bring today's society closer to a utopian society.

After a lot of back and forth, we found that a well-functioning democracy is the most utopian society feasible, It allows for diversity in thought and belief and allows for everyone to have an equal say.

However, today's democracy has one crucial flaw: some people don't vote. When people don't vote their needs aren't being registered, which means the political agenda is imbalanced and unrepresentative.

Furthermore, nonvoters tend to be individuals with little education, and little income. The exact people who need to be heard the most. We sat out to see if we could get stimulate people to vote in the part of the Netherlands where least people vote: Bloemhof, Rotterdam.

As a part of the NRC charity awards we got assigned to make an ad for Join The Pipe.

The client let allowed us quite a bit of freedom, and we found it was more important to own and bring attention to the problem, rather than just promoting bottles. Our goal was to make people think about the effects of using plastic bottles and get more people to use reusable bottles in order to reduce plastic consumption.

As a part of a Jonge Honden brief, we were asked to create a recruitment campaign for the Business operations of the Dutch Police. Business operations is everything that supports operations: IT-specialists, policy officers, HR, staff, innovations department, fleet managers, etc.

Just like within most other organizations, countless colleagues will leave the organization in the coming years due to, for example, impending retirement. In addition, due to RPA/automation, jobs in business operations will disappear in the coming 10 years, which will change the profession for many. Those new jobs require talents that need digital skills and connecting qualities. Because all companies and organizations are struggling with this issue, there is a "war on talent" going on and therefore scarcity of these talents.

The goal was to create a campaign for students and graduates with talents that profile PDC as an appealing employer and to show that the police is not just the blue on the street. 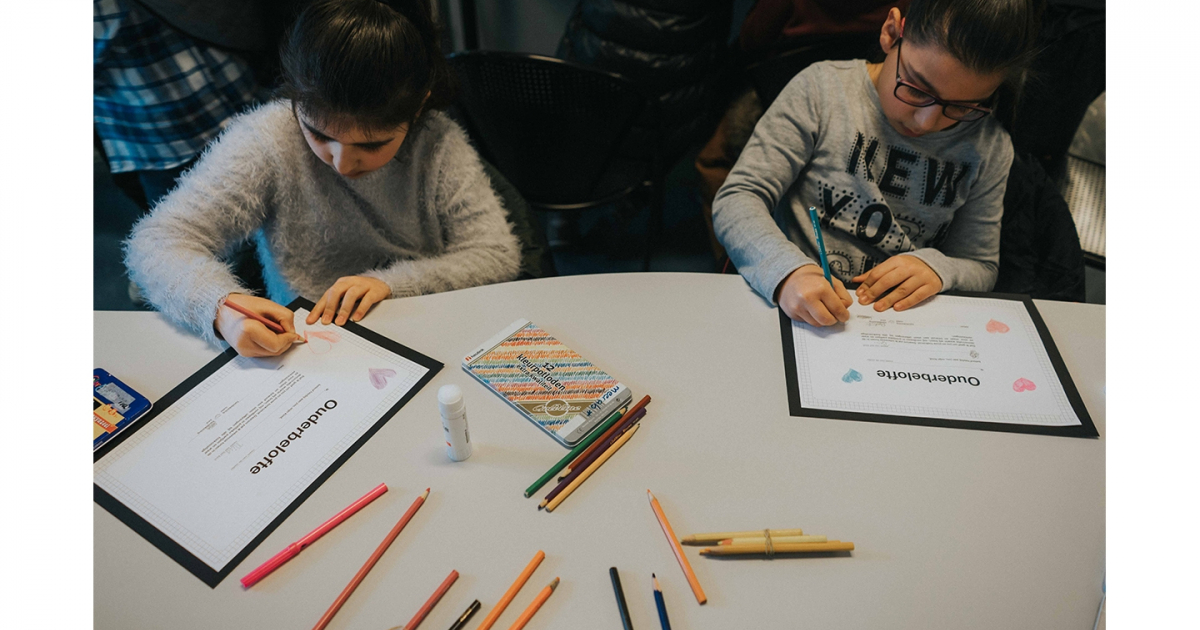 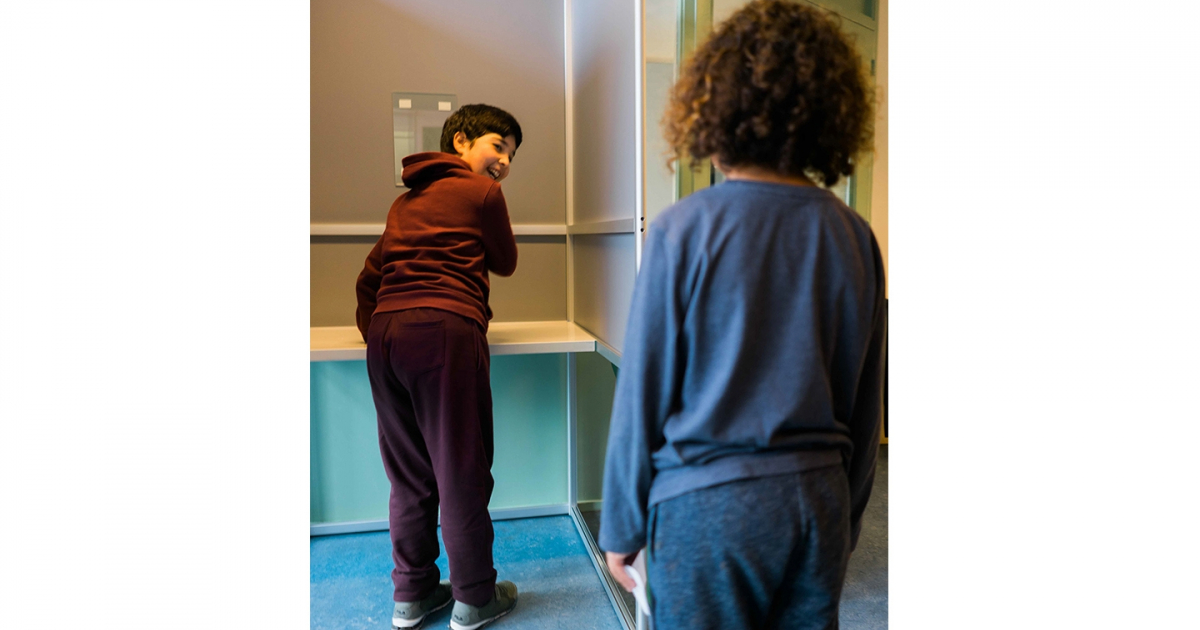 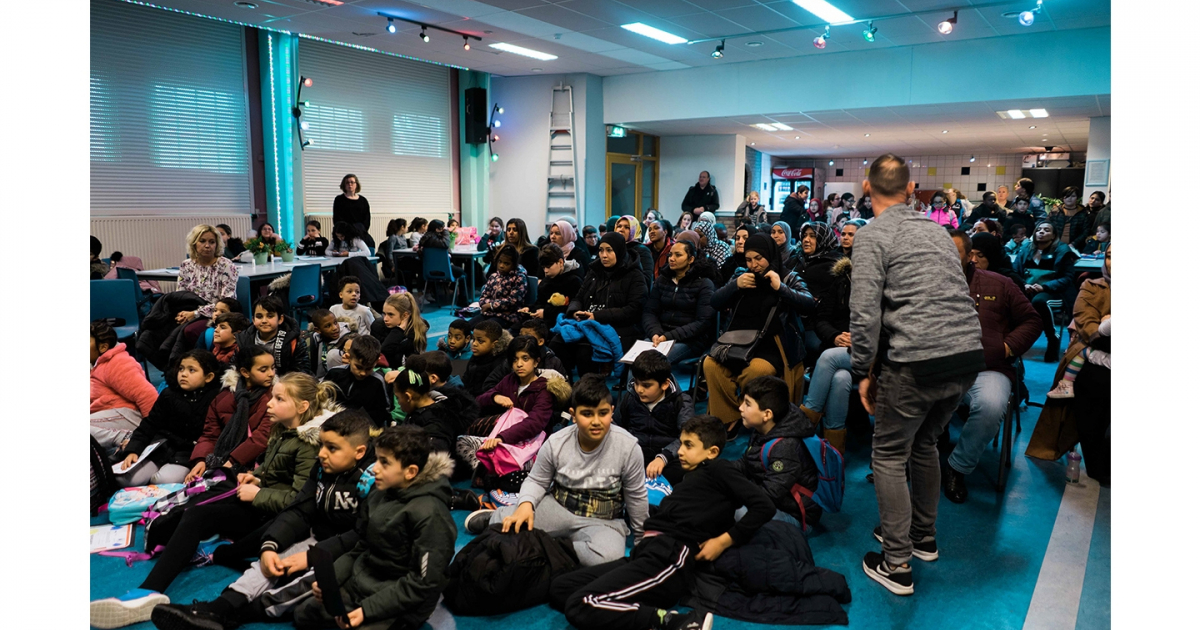 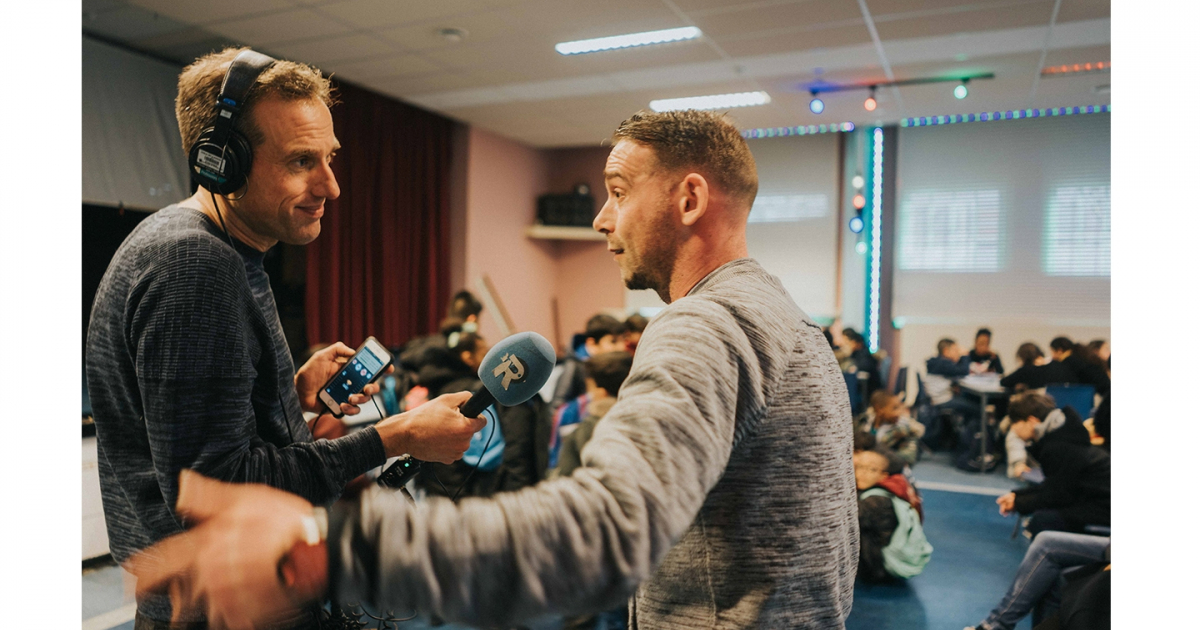 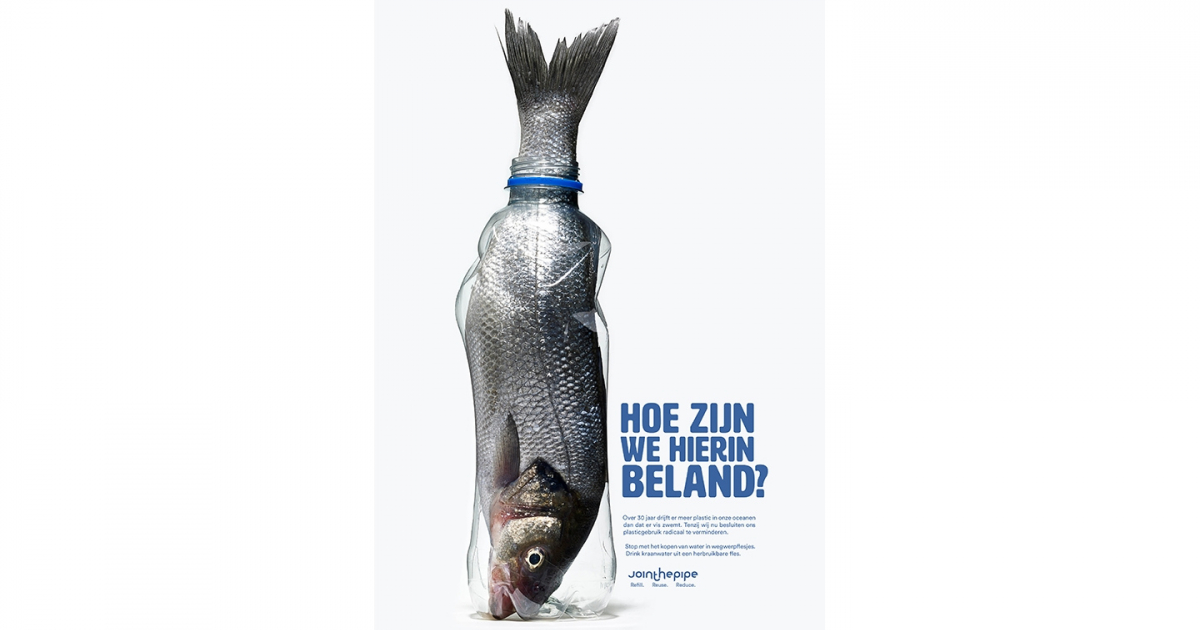 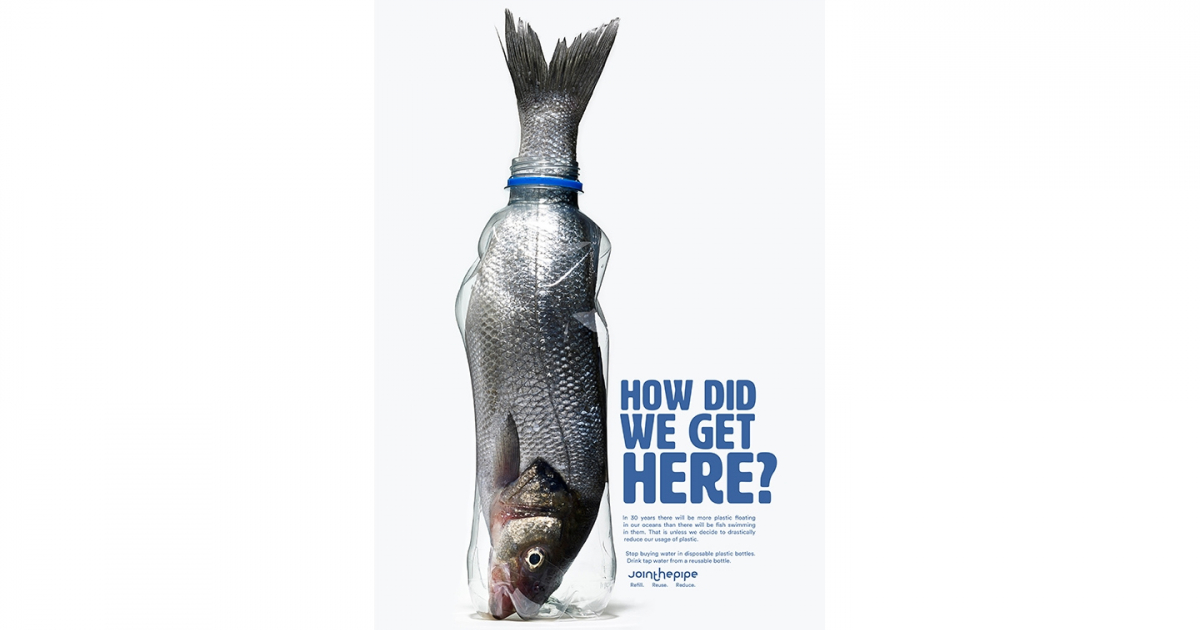 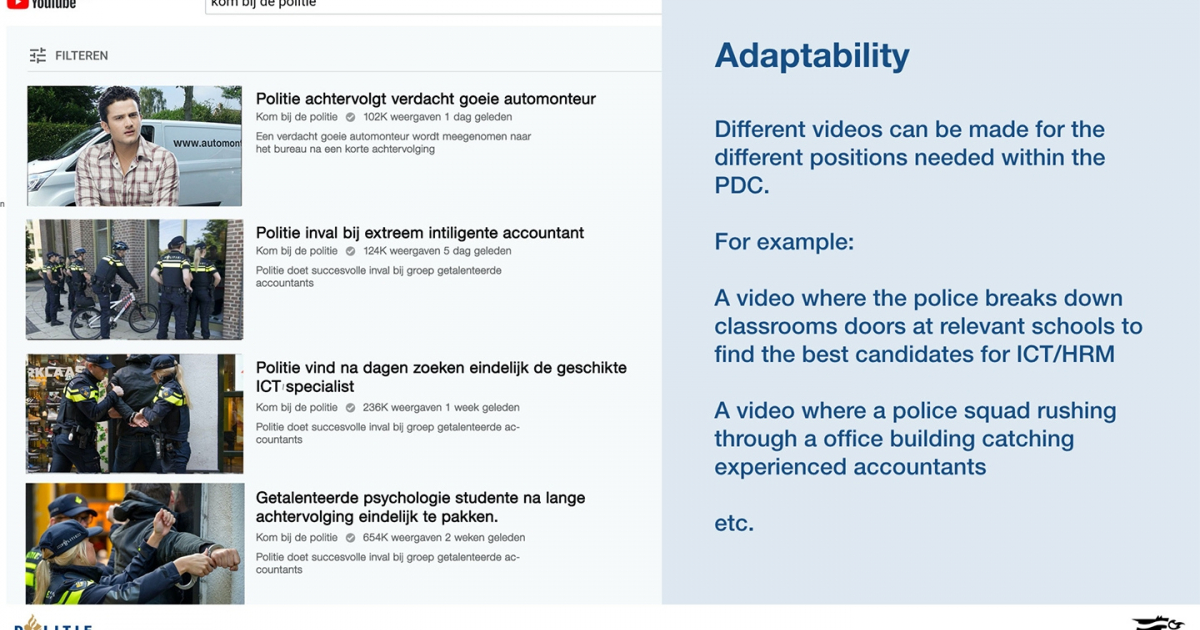 This project was unanimously voted by the jury. The body of work captures a raw energy, with a refreshing perspective of beauty and aethetics, colourful powerful playful with a strong voice contributing to the new generation of creatives.